You are here: Home / Business Tips / 10 Things They Don’t Tell You About Crowdfunding 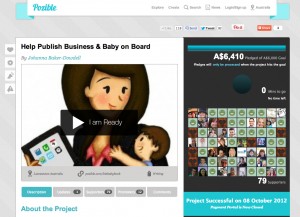 I recently ran a crowdfunding campaign on Pozible to raise the money I needed to self publish my book Business & Baby on Board. The campaign was a success (in fact it was overfunded), and it came with 10 lessons that I’m going to share with you here.

2. Tell a story. People are more likely to make a pledge if they believe in what you are doing. After all, you’re asking them for money so show them the passion behind the project by explaining where the idea came from and why you are doing it. Use words, videos, photos etc to share the story.

3. Know your market. Pozible (the platform I chose to use) is based in Melbourne, so it has more of an Aussie slant to the projects, whereas Kickstarter has a firmer footing with US crowdfunders. Think about the networks you will be asking to support your project and then find the platform they are most likely to use.

4. This is no time to be a shrinking violet. For a successful crowdfunding campaign you need to either be known by millions around the world like Seth Godin, or be willing to tell everyone you know (and everyone they know) about the project and ask them to support it.

5. Make the rewards worth pledging for. It is unlikely you will raise the money you need to fund your project without enticements so think about who is likely to make a pledge and what they would like in return. I had a mix of rewards from a bookmark for a $5 pledge, to a signed copy of the book for $25 pledges, right through to coupon ads in the back of the book for businesses pledging $200 and a one-day personal consultation with me for a $1000 pledge.

6. Your life will be consumed by your project. It will take up every second of time you have while the campaign is running because if you don’t make the target, you won’t get the money. Crowdfunding is all or nothing, so be prepared to spend lots of time encouraging people to make a pledge.

7. Support other crowdfunding projects. Not only will you find out how the process works from the pledger’s point of view, making a pledge to others shows you believe in the system and are willing to buy into the idea that what goes around comes around.

8. Don’t forget to say thank you. Thank everybody who makes a pledge, shares the project link, tells others about it, or gives you moral support. Without them you have nothing (except maybe a big pledge from your mum).

9. Choose your timeframe and funding target carefully. If you have a lot of money to raise it might be worth running a 90-day campaign, but remember you have to keep asking for support for the whole time. I worked out how much I needed to raise daily and aimed for that target. Be realistic about your funding target. I wanted to raise enough money to help me with the book cover design and publishing costs. I clearly explained how I was going to use the money raised.

10. Don’t give up. Those who followed the campaign will know the first time I ran it I missed out on making my funding target by just $320! After speaking with some friends and Pozible I decided to run it again with a few tweaks and this made all the difference the second time.

* There are still a limited number of advertising spots available in Business & Baby on Board if you’d like to reach a captive audience of business mums. Ads will appear after the Business Toolkit resource section in both the printed and electronic version of the book *

If you’re interested in grabbing one of these ads email me at johanna [at] strawberrycommunications [dot] com [dot] au.

I am also signing the first 500 copies of Business & Baby on Board sold if you want to secure a pre-sale copy, head over to the ‘Books’ tab and buy one copy for $25, or two for $40.

As a child, Johanna always wanted to know what was happening in the world around her and asked lots of questions. Imagine her delight when she discovered you could make a career from sharing stories. Johanna studied journalism and public relations at the University of Newcastle in New South Wales. She worked at several newspapers before trying her … END_OF_DOCUMENT_TOKEN_TO_BE_REPLACED