You are here: Home / Business Tips / Storytelling Through Data

A departure from my usual articles about writing and marketing, I thought I’d share some data analysis with you this month. I wrote about using data to tell a story two years ago and had a great response so thought it was worth revisiting.

For those readers who have been following this newsletter for a number of years you will know I’m now in the third year of my PhD. This is the year when everything I’ve been doing over the past two years is starting to come together and I can see how my project will actually look (it’s about time!).

Where does data fit into journalism?

One thing the uni has been very keen for me to do is interact with my peers. This has a twofold effect in that it helps me build a network around my research interest, but also gets me to step outside my little study bubble and share what it is I’m working on with others. I now research in an office with four other PhD candidates, and last week I was asked to share my research methods with the digital technology special interest group I’m a member of. The data I’m sharing here is what I put together for the presentation.

Before I go too much further, I should refresh your memory on my research topic. I am looking at how journalists use social media texts to report on crisis events. To do this I am investigating three key crisis events from the UK – the London Bombings, UK Riots and Lee Rigby’s murder. These events span an eight-year period between 2005 and 2013, which gives me a chance to track longitudinal developments in journalist’s use of user-generated social media texts as a news source. 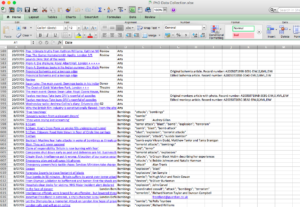 How I track the data

For each of the crisis events I’m studying I have analysed a two-week sample of newspaper reports from The Guardian’s print archives. You can see from this image of my raw data about the London Bombings in July 2005, that I recorded the data, headline (with a link to the electronic archive), section the article appeared in, topic of the article, key words and journalist bylines. Once I removed duplicates, letters, TV guide, gig guide, stock market listings etc I had 3980 articles to analyse. From this figure I found 406 articles where journalists specifically reported on the bombings.

I conducted a content analysis of the 406 bombings articles to find the articles where social media was a factor, ie used as a news source or mentioned in the article. This gave me 16 articles, which I then coded to ascertain the type of social media text that had been mentioned, used or quoted in the article, ie photo, video, blog post etc. 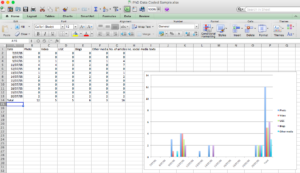 To clarify the London Bombings data, I took a count of the number and types of social media texts and then graphed them by date. This shows which days social media texts featured more prominently, as well as the totals for text types. From this I can see social media texts contributed by members of the public and then co-opted by Guardian journalists in their reporting peaked on July 11, 2005, four days after the bombings. The graph also shows me that photos and blog posts were the most used/quoted texts. 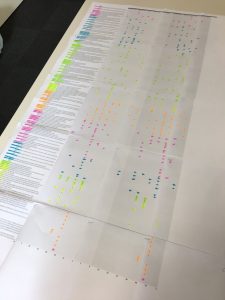 Coding on a larger scale

The London Bombings case was the smallest of the three I studied in terms of data collection. As mentioned above, I coded 16 articles from the raw sample of 3980 originally. My analysis of the UK Riots in August 2011 and Lee Rigby’s death in May 2013 was more involved, as social media had become a much bigger factor in crisis reporting by then. Here are the figures:

This image shows my coding process for the riot sample. I used different colours for different dates to help me get a handle on the data. When I printed the Excel file out it spanned 20 pages that I then had to pin and staple together so I could read it!

To arrive at these three samples I read more than 14,000 articles from The Guardian’s archives, which took me around nine months. Reducing all that work to a few hundred words and some graphs seems almost criminal, but what I gained from the exercise is a far greater understanding of the role social media plays in crisis reporting.

Is data something you like playing around with? Tell me how you use data to tell stories.

As a child, Johanna always wanted to know what was happening in the world around her and asked lots of questions. Imagine her delight when she discovered you could make a career from sharing stories. Johanna studied journalism and public relations at the University of Newcastle in New South Wales. She worked at several newspapers before trying her … END_OF_DOCUMENT_TOKEN_TO_BE_REPLACED