You are here: Home / Latest News / Sydney’s Christine Kininmonth is the 2014 AusMumpreneur of the Year 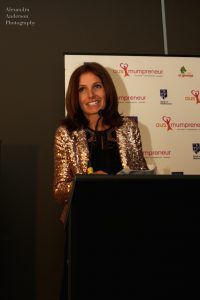 Sydney businesswoman Christine Kininmonth has been named as the 2014 St.George Banking Group AusMumpreneur of the Year at a gala cocktail party in Melbourne on Saturday.

Christine, who is the founder and director of maternity and baby goods retailer Fertile Mind, took out the major award against nine other finalists who were vying for the title of Australia and New Zealand’s top business mum.

Mother of four Christine was presented with her award by naming sponsor St.George Bank’s Head of SME Chris Screen. Christine said she was excited to be named the 2014 St.George Banking Group AusMumpreneur of the Year against such a talented line up of finalists.

“There are women doing amazing things and I met so many over this weekend. I think that all of us have something to offer and I’m thrilled to be recognised in this group,” Christine said.

“Some of the best advice I could give is get advice, get mentoring and talk to women who have already been in business. If I could go back and do it differently I would have probably gone to more conferences to meet other women who’d done it before,” she said.

“Mums who are achieving outstanding business success should be recognised and that’s what the St George Banking Group AusMumpreneur Awards are all about,” he said.

This is the fifth year the AusMumpreneur Awards have run, with the business mum community growing at lightning speed as mothers look at opportunities to join the ranks of small business owners.

AusMumpreneur Network owners Peace Mitchell and Katy Garner said the awards show the passion of women who want to realise their entrepreneurial dreams as well as be great mums.

“Christine is a such a great ambassador for mumpreneurs. She is an outstanding role model for women in business and is living proof of what you can achieve when you put your mind to it,” Peace said.

There are 11 categories in the 2014 St.George Banking Group AusMumpreneur Awards, with three judged and eight open to public voting. Winners are as follows:

The 2014 St.George Banking Group AusMumpreneur Awards were presented at a gala event on Saturday at Rydges Swanston, Melbourne, during the AusMumpreneur Conference.

As a child, Johanna always wanted to know what was happening in the world around her and asked lots of questions. Imagine her delight when she discovered you could make a career from sharing stories. Johanna studied journalism and public relations at the University of Newcastle in New South Wales. She worked at several newspapers before trying her … END_OF_DOCUMENT_TOKEN_TO_BE_REPLACED